Transfer of transalpine freight traffic from road to rail

Since 1994, the Swiss Constitution has contained a provision on transferring freight transport through the Alps from road to rail. Thanks to the effective measures taken, 74% of freight is now transported by rail. The aim is to continue with this policy and to reduce the number of truck journeys through the Alps to 650,000 a year.

Since the Swiss voters approved the 1994 ‘Alpine Initiative’, the principle has been enshrined in the Federal Constitution, to transfer transit freight traffic through the Alps from road to rail. The Federal Council and Parliament ensured that this resolution can be implemented within a market economy framework and without discrimination against foreign hauliers. The Goods Traffic Transfer Act provides that the number of journeys by domestic and foreign lorries and semi-trailers through the Swiss Alps must be lowered from 1.4 million in 2000 to 650,000 per year. Various instruments have been approved and implemented to achieve this:

Thanks to these tools and measures, the number of heavy goods vehicles passing through the Swiss Alps has fallen to below one million. Without these measures, because freight traffic is constantly growing, around 800,000 additional lorries and semi-trailers would now be crossing the Alps every year. Freight traffic through the Swiss Alps by rail has a market share of about 74% – significantly more than in neighbouring countries with similar topography. Combined transport dominates this figure. 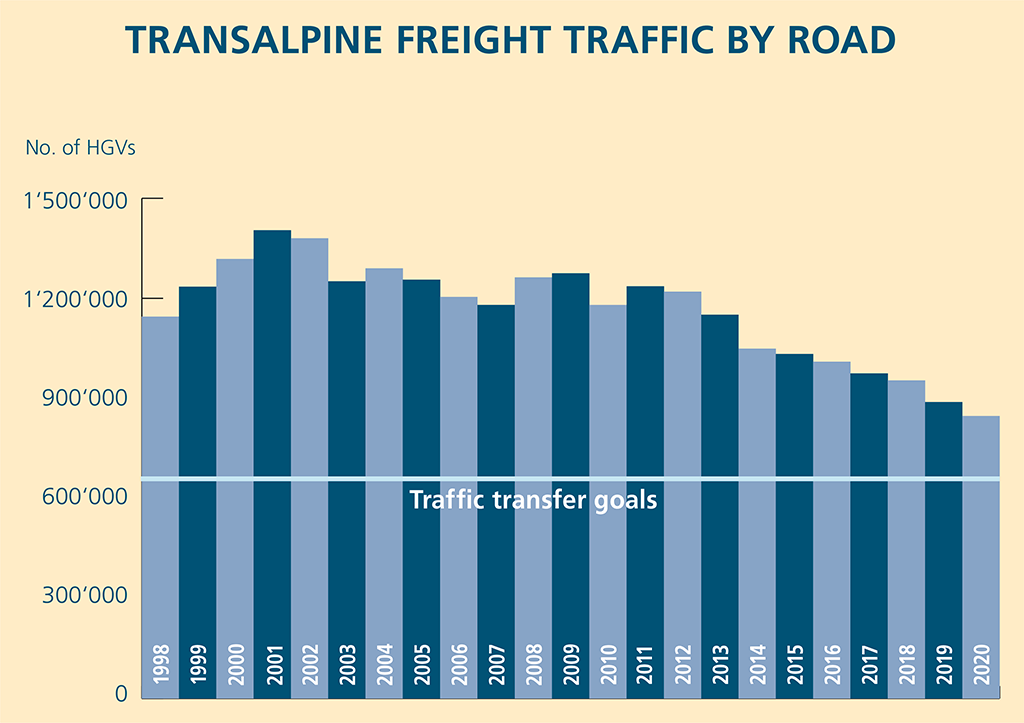 The New Rail Link through the Alps (NRLA)